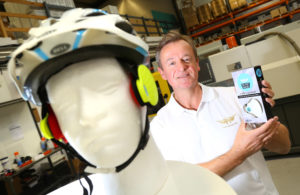 Designed to enable cyclists to hear what’s going on in their surroundings more clearly by blocking out wind noise, the Helmet Angel is a wind-deflecting shell that attaches to the strap of the cyclist’s helmet. The product’s unique design will also help to combat the earache that many cyclists suffer during longer rides.

A keen cyclist himself, the idea for the Helmet Angel came to David, a flooring company owner, when he was forced from his bike during a ride back in 1992 when a truck came alongside him at close range.

“I didn’t even hear it coming!” David explained.

“I was cycling downhill on a stretch of country road when a truck which was trying to overtake me suddenly appeared at my shoulder. Because I hadn’t heard it coming, it spooked me and caused me to move over onto the gravel at the side of the road, at which point, I lost control of my front wheel and fell onto the bank side.

“The truck itself never actually touched me, but the fact that I did not hear it approaching until I caught sight of it right alongside me caused me to fall.

“At the time the incident happened, I was working at a carpet factory where you had to wear earplugs while on site due to the noise levels. I began adapting these earplugs to try to create something that would deflect wind noise while riding my bike. It wasn’t until I became a father to Hannah and Aidan, who live in Holland where helmets are not a priority, then later, my daughter Elia, that I decided to press on with the idea and create the Helmet Angel.

“My hope for the product is that it will bring more awareness to listening. Cyclists should always be aware of what is happening around them, but most especially behind them, so that they can react quickly and efficiently to road traffic, commands and warnings.”

“We used the Helmet Angel shells on the three-day 137 mile Coast-to-Coast cycle route, and they were absolutely excellent.

“The shells and their padding are so lightweight and comfortable, you very quickly forget they are there, and they are also very stable – once we’d set them in position, they didn’t move at all.

“The use of the product was also really good. We found that the shells were very effective in mitigating wind noise and helping us to detect where traffic was coming from much more easily than if we hadn’t been wearing them. Even cycling at 30-40mph downhill, we could all hear perfectly.

“The shells provided excellent protection from the elements, which was particularly useful in the driving rain and when we went through a hailstorm up on the moors above Allenheads. We were very grateful for the shells in protecting us from the elements and high winds, and they kept us much warmer when the air turned cold, too.

I am really pleased with the shells. They were so beneficial for hearing traffic and communicating with the other riders, I would recommend them to everyone. I will definitely be keeping them on my helmet from now on.”